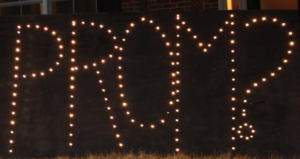 Sarah applied a fresh coat of gloss to her lips and checked her teeth for stray strawberry seeds. Why did she put herself through this every morning? Forest never noticed. Almost four years of sitting in the desk next to him—Mitchell and Miller. On the first day of freshman year, he’d declared they would be best friends, and that’s exactly what they’d been—friends. Occasionally, he paid her a compliment, but usually, he discussed his fluctuating relationship status with Jenna. During the breakups, Sarah would have him all to herself, but Jenna always managed to lure him back.

Sarah opened her planner. Activities and deadlines filled the boxes of the calendar. She drew another jagged line around the starburst on the last Saturday of the month—Senior Prom. Last night, during one of their marathon texting sessions, Forest assured her that someone would ask her this week. Why couldn’t it be him?

The door crashed against the metal cupboard. “You’re not going to believe this!”

Sarah jumped in her seat. Several students snickered, accustomed to the routine.

“Dude, she’s not that hot. Cut her loose.” Sam rolled his eyes to his brother.

“Classy, guys.” Forest strode across the classroom and dropped into his desk. “She expected me to miss the G-day Spring Football Game in Athens to go dress shopping with her.”

“Hmm.” Sarah doodled in the margin. Why was he surprised? Jenna spent more time learning to manipulate Forest than any other subject in high school, which explained her mediocre GPA. But she had an “A” in drama. Jenna could produce more tears than Niagra falls. For a smart guy, Forest didn’t seem to catch onto her games and couldn’t stand to see her upset. He was empathetic to a fault. One of the many reasons Sarah loved him.

“Aren’t you going to say anything?” He rested his elbow on her desk.

Sarah glanced up at him. Their faces inches apart. Her heart fluttered. Flecks of gold radiated in his hazel eyes. What if she told him the truth?

Her stomach knotted. “My mom said not to say anything if you couldn’t say something nice.” She’d had enough of Jenna.

Forest slumped back into his seat. “She’s already crying and told me ‘to go if football was more important than her.’ But she doesn’t mean it. She’ll hold a grudge. Why does she need me to look at dresses? I even offered to go another day. But she insisted this was the only time. I told her I’d made plans with you. She said you’d understand.”

Sarah pressed her pen into the paper. Heat flowed through her veins. Forest might be oblivious to Sarah, but not Jenna. She clenched her jaw.

“That’s it!” Sarah slammed her hands on the desk, sending her pen flying across the room.

Mrs. Lee and the other students spun to face her.

“I can’t do this anymore. Stop whining about her and do something about it. I’ve been holding your hand for almost four years, waiting and not believing that you could be so blind. Keeping myself available and hoping you’d finally wake up, but clearly, it’s never going to happen.” Tears pushed at the backs of her eyes. “Do whatever you want? Just leave me out of it.” Sarah dropped her face in her hands, pressing her palms into her eyes. Why did she always have to cry when she was mad? Her cheeks burned as the flames of embarrassment raged down her neck.

The silence stung her ears. Everyone was surely staring at her.

A strong arm wrapped around her shoulders. “Sarah, I’m sorry.” Forest lifted her hair, tucking it behind her ear. “I’m such an idiot.”

“Please look at me.” He brushed a finger under her chin.

She shook her head.

He gathered her closer. “I told Jenna she was right. You would understand because you actually care about me, and if she cared half as much, she wouldn’t ask me to change our plans. Then I told her it was over, and she could find another Prom date.”

His breath tickled her ear, sending shivers down her back. Did he say he broke up with her? With her head still in her hands, Sarah swiveled her face to meet his gaze.

Forest grinned as he brushed away the dampness from her cheeks. “I’ve wanted to ask you out forever, but I didn’t want to ruin our friendship and didn’t think you were interested.”

“Wh-what are you saying?” Sarah bit her quivering lip.

“I promised you someone would ask this week.” He took her hands in his. “Will you be my date for Prom?”