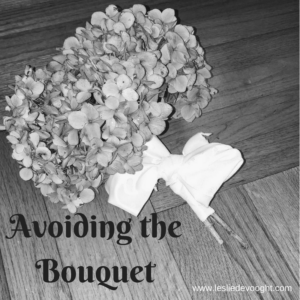 The bouquet of white hydrangeas launched from the bride’s hands and soared into the air, ricocheting off the chandelier. As it plummeted toward Anna, she recoiled, shuddering. Two younger women in skimpy dresses dove in front of her with apparent disregard for maintaining any mystery about their lack of undergarments.

Anna pivoted, abandoning the inevitable tug-of-war, grabbed a glass of champagne and tossed back the bubbles. As she threaded the crowd, she spied another flute of cheer on a service table. She snatched it up and shoved the door open, stumbling into the hall. How many glasses had she consumed? Apparently not enough.

A quiet summer night beckoned her from the other side of the French doors. Her heart pounded to the rhythm of the band’s cover of Brick House. Did every wedding band include that song in its set list? She leaned against the door frame, gazing through the window. The soles of her feet ached. Moonbeams danced across the lawn, leading to the brooding ocean. The music grew louder. She glanced over her shoulder.

A couple danced out of the ballroom, gazing into one another’s eyes. At this point in the night, no one would notice if she disappeared for a while…